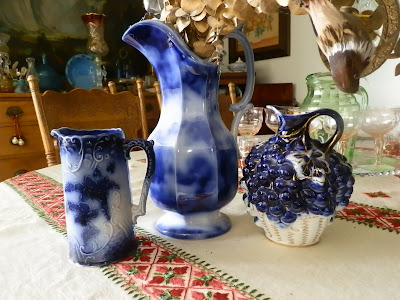 In the early 1980’s the country was swept with nostalgia for all things related to early American. This was due to the popular programs of “The Walton’s” and the Depression Era,” The Wild Wild West” and other programs of it’s genre’ and the Victorian Era and “Little House on the Prairie”and the Country fad.
I have have been enamored with all three periods during my years of collecting. Having spent many of my childhood years on a farm, Country Decorating warmed the cockles of my heart.Farm life was a struggle and  Country Collectibles  reminded me of those years. Though they were a struggle  there are so many wonderful memories of my farm life.
Country Decorating created in me a fondness for blue and white china. Every Country or Victorian program had someone sipping tea from a beautiful delicate Blue Willow Cup…hence my consuming fascination with Blue Willow China.
Well as in all collecting fads your tastes will progress from your original passion to a new passion ,discovered during your quest for the former…in my case it became Flow Blue China.
Flow Blue China it seems,though fascinatingly beautiful as it is, was a mistake. In the early 1800’s England became consumed with the blue and white china being imported from China. These imports were for only the very wealthy so the Staffordshire pottery companies began to make relatively good copies. The design would be painted or transferred to the white bodied stoneware and fired. Well one day something happened during the firing and the blue flowed on to the white making an attractive blurry  design. It became very desirable and is to this day highly collectible. If the pottery could speak it would look at the blurry blue on it’s white body and exclaim”Am I blue”,(for those too young to remember this is the title of a 50’s pop song).
I’ll share with you some of my most unusual pieces and keep in mind they were purchased for $25 or less…they would be much more if purchased in antique shops. 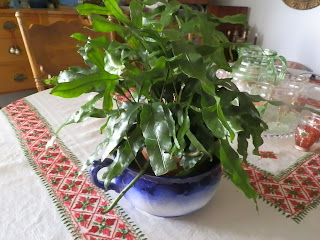 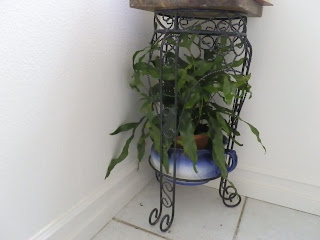 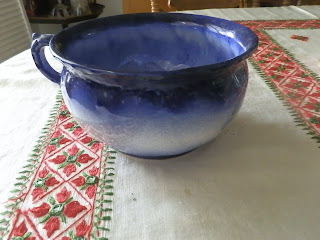 This my most exciting find. Found for $5 this chamber pot has long been my desire. Until my children were grown I couldn’t even look at one of these as they would recoil in horror and scream”Don’t touch that and don’t you dare to bring one of those into our house!As you can see it makes a marvelous planter especially for my powder room.
Below is an especially beautiful pitcher portion of a bowl and pitcher used in bedrooms on a wash stand,  the most convenient item for washing face and hands in morning until running water was available. This is a particularly blurred version to the point that the original design is unintelligible. It is an early design as it is not marked and of a heavier weight. In 1890 a law was passed if pottery was made in England it had to be marked England.Pieces before 1890 are more valuable.Those produced after 1890 are lighter in weight and often have gold trim. 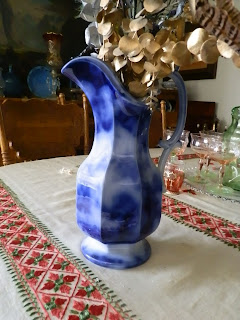 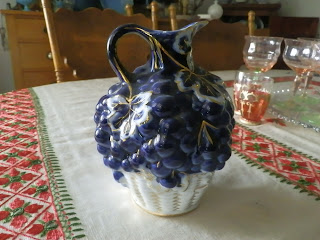 A decanter beautifully presented but of early 1900’s as it has gold trim and is marked England. 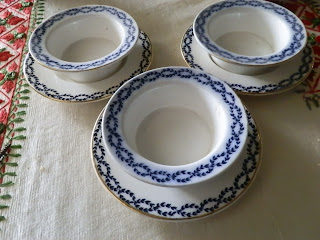 A lovely set of flow blue finger bowls.Yes Victorians could never eat with messy fingers.
” Fingerlicken Good” was not allowed. 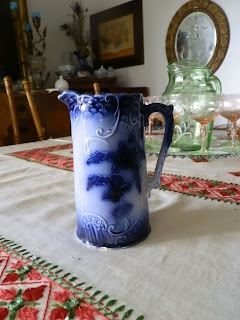 This a milk pitcher. Every Victorian table was set with a milk pitcher especially at breakfast.
Would love to hear of your discoveries shop with me online @http://marykay.com/mmar